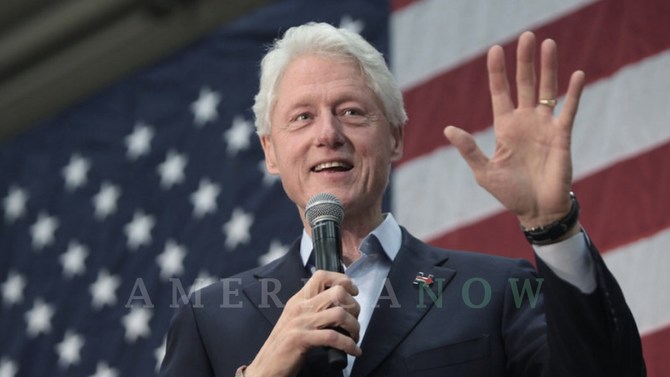 In never-before-seen photos obtained exclusively by DailyMail.com, former president Bill Clinton is seen grinning with pleasure while receiving an intimate neck massage from one of Jeffrey Epstein’s victims.

Clinton is seen laughing as he gets a massage from 22-year-old Chauntae Davis, a massage therapist who also played the role of Epstein’s personal masseuse.

Then 56, Clinton had complained of a stiff neck after falling asleep on The Lolita Express, Epstein’s private jet, while on a humanitarian trip to Africa in September 2002 with Epstein.

Ghislaine Maxwell, Epstein’s girlfriend now in prison on sex trafficking charges, repeatedly kept urging Davies to give Clinton a massage while the plane was refueling at an airport in Portugal. Clinton then asked Davis: “Would you mind giving it a crack?”

One photo shows Clinton, in a yellow button down shirt and beige slacks and his hands resting on his lap, leaning back as Davies knelt on a chair behind him for the massage.

In another photo, Clinton is seen smiling in relief as Davies massages him.

Davies, who claims that she was raped by Epstein several times after she was recruited by Maxwell, stated that Clinton was a “complete gentleman” on the trip.

Davies, presently in her early 40s, explained the pictures: “Although the image looks bizarre, President Clinton was a perfect gentleman during the trip and I saw absolutely no foul play involving him. We had a stop-over for the jet to refuel and while we were in the terminal the ex-President was complaining of stiffness from falling asleep in his chair. Ghislaine chimed in to be funny and said that I could give him a massage. Everyone had a little chuckle but Ghislaine in her prim British accent insisted and said I was good. The President then asked me ‘would you mind giving it a crack.’” She continued: “He turned his back to me and I reached up and I started to rub out the kink in our former President's neck and shoulder.”

She then revealed her embarrassment after she innocently told Clinton: “I've got a bad angle, would you mind getting on your knees? I'm not at all sure what came over me. I was groggy and have also always been the queen of putting my foot in my mouth.”

“For a moment the room fell silent. I couldn't believe I'd said that. The words just shot out before I realized what I was saying or who I said it to. Then, although his face had turned the color of fire, he laughed. The whole room was laughing too. And, being the good sport he was, he sat down so I could get a better angle,” reads an excerpt from her upcoming book.

Davies claims that she had been sexually abused by Epstein for several years before finally escaping his clutches in 2005.

She was interviewed by the FBI and the Assistant Attorney General of New Mexico in July 2019. Five days later, Epstein was arrested and charged in New York. He committed suicide in his jail cell in August. Davies stated that she became part of Epstein's inner circle when she was at a college in Los Angeles training to be a massage therapist. She met Ghislaine at the Four Seasons Hotel in Beverly Hills, and hours later, Ghislaine contacted her and asked her to join her on a private jet to Epstein's Palm Beach, Florida home.

Within weeks she was traveling around the world on The Lolita Express and to Epstein's private island where she revealed she was attacked.

Davies stated that revisiting the photos made her question how such powerful people were drawn into Epstein's circle as he committed heinous sex crimes.

“It's clear that Epstein was using this private jet and his wealth to get close to rich and powerful people,” she said. “Looking back at these images now it raises a lot of questions about why Bill Clinton was using the plane and what perhaps Jeffrey may have been trying to accomplish by having him around.”