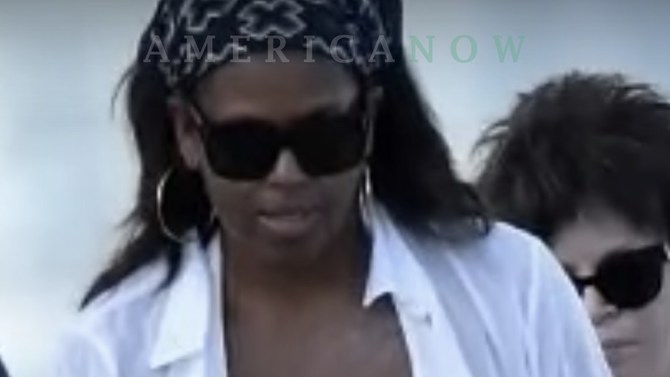 Michelle Obama and Malia, her eldest daughter, were a sight to see as they showed out in swimsuits during a weekend stay in Miami Beach.

Michelle, 53, was clad in a white bikini top with matching high-waisted white denim cut-off shorts as she made her way through the sand – barefoot – while holding her shoes in her hand.

The former first lady had on a long white blouse to cover up the swimsuit, a bandanna and large fold hoop earrings.

Malia, also casually dressed, walked alongside her mother in a tan hoodie covering the top part of her bikini, with her black bottoms visible.

She walked with a pair of white sneakers in one hand, and her iPhone, charger, and book in the other.

The two seemed perfectly at peace during the outing, which appeared to be a girl’s only outing as former president Barack Obama was nowhere in sight.

Malia and Michelle later left their hotel and grabbed dinner at Prime 112 steakhouse before heading out of town.

Malia was dressed in a black and white patterned romper, with a bright smile on her face as she stepped outside the restaurant. Michelle also appeared to be in great spirits as she emerged right behind her daughter.

Michelle walked out of the celeb-friendly establishment having traded in her beachwear for a set of flowing high-waisted trousers, a neutral green tank and long blue cardigan.

Her accessories featured a number of chains and a black purse with a lengthy strap.

Sasha’s presence was missed, with many speculating as to where she may have been over the weekend. However, at the same time last year, Sasha was in Miami Beach with Joe Biden’s daughter and a third friend, and her stay was well documented.