Note: we are republishing this story in light of recent reports across the country that suggest more and more Americans are having positive interactions with police officers despite changing attitudes about police departments and wider conversation about police reform.

After stopping at her lemonade stand, an Ohio sheriff's deputy gave a 9-year-old a special surprise that she will never forget.

According to Yahoo! News, Lake County Sheriff's Deputy Zach Ropos was on patrol in Painesville, Ohio, when he made a quick stop at a lemonade stand run by 9-year-old Gabrielle.

"I see a little girl come running up to my police car," said Ropos, 22. "She hands me a glass, I hand her a few bucks. I asked her what she wanted to do with the money ... she said she'd get an iPad, to help with school and play games."

Ropos, admiring the girl's work ethic, told her mother that he had an old iPad sitting at home that he wanted to bring to Gabrielle. However, when he went to make sure it still worked, he was disappointed.

"I went home that night, fired up the iPad, but it just wasn't updated anymore ... nothing really worked on it," the officer said. The following day, Ropos went to a local store and asked if they would be willing to chip in toward a tablet for Gabrielle with him. Later that day, he met up with Gabrielle and her mother.

"I talked to the little girl, gave her a speech about how courageous and admirable I think her efforts were to save up her money. I asked her how much she saved up and she said she only had a few dollars," Ropos said.

Gabrielle explained to the officer that her mother had run out of gas while driving, so she gave her some of the money she had saved up from the lemonade stand to fill up her tank.

"When she told me she gave the money to her mom ... that's when I almost started crying because of how great of a kid she really was," the officer said. 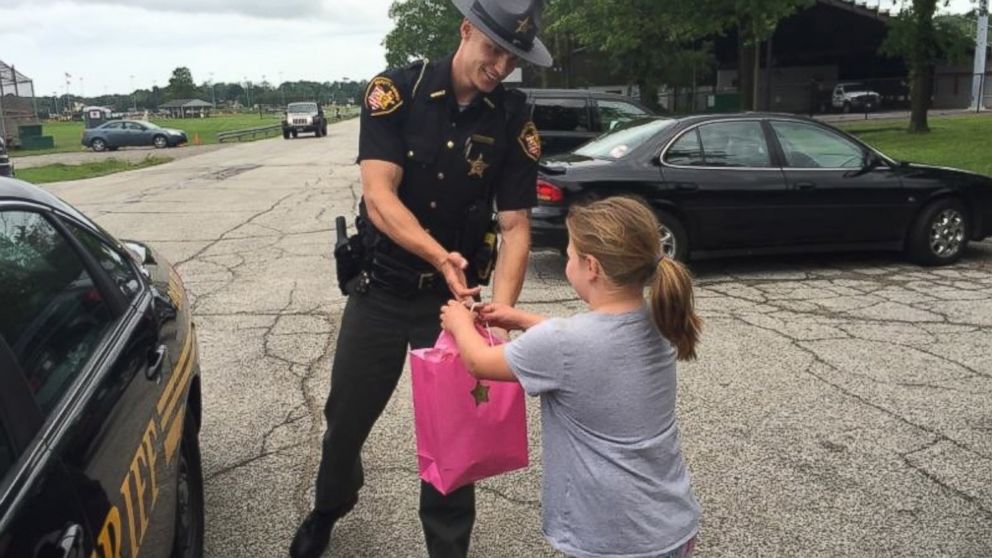 Hearing what Gabrielle did for her mother made what Ropos was about to do even sweeter -- he handed her a brand new tablet, in a moment captured on camera by Ropos' co-worker. Gabrielle was thrilled.

Ropos said of the 9-year-old, "She just wouldn't stop hugging me," adding, "Seeing her face is how I remember Christmas when I was 5 years old. She couldn't stop smiling. Her smile was worth a million dollars."

Readers shared their thoughts on the touching story on social media.

"Outstanding compassion by this dedicated officer, more of these thoughtful stories should be circulated, well done," one reader commented.

"May God Bless this Officer for being so kind to this little girl," another user wrote. "Thank you for Officer Ropos service in the police department."